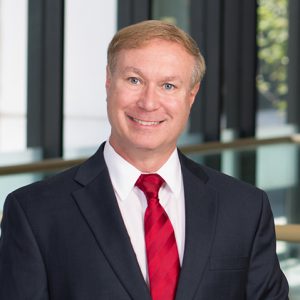 After graduation, Karl served four years in the honors program of the United States Army Corps of Engineers. He practiced two and a half years in Contract and Procurement and one and a half years with the Engineer Chief Trial Attorney. In his work in the Office of the Chief Counsel, Karl assisted in the development of overall Corps policy in such areas as Contract Disputes Act jurisdictional issues, drafting of the special weather clause in the Corps’ construction projects, handling of claims arising under the Variations in Estimated Quantities clause and other issues as well as the handling of significant and precedent setting contract appeals. Karl received the Army Meritorious Service Medal for his work on disputes arising from the Corps’ Saudi Arabian Construction Program.

With Smith, Currie & Hancock, Karl has continued his emphasis on government contracting to include state and local as well as federal government contracting. In addition, his practice has expanded to include service and supply government contracts, private construction projects and emergency disaster relief contracts. He has represented service as well as construction contractors in matters such as bid protests and mistakes in bids, claims, appeals, federal court injunctive and extraordinary relief cases, performance evaluation ratings, small business size protests and certifications, contractor pre-qualification, and suspensions and debarments.

Though much of his practice involves litigation and other dispute resolution, Karl is firmly committed to the practice of preventive law as a means of conserving the financial and personnel resources of his clients. To this end, Karl has drafted numerous business ethics programs, standards of conduct, business policy manuals, purchase order forms, subcontract forms as well as numerous other documents to prevent disputes from arising.

Karl was born in Iron Mountain, Michigan, and is married to the former Barbara Marchetti of Atlantic City, New Jersey. They have three children, Karl, Kenneth and Katherine.