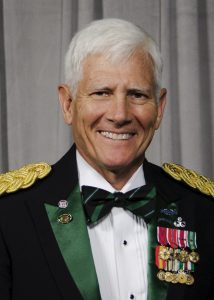 Colonel (Retired)  Andy Anderson was born in Albany, Ga. In 1951 and began his military service via an Army ROTC scholarship at the University of Georgia in the fall of 1969. Upon graduating with a bachelor’s and a master’s in business administration (MBA)  from his beloved University of Georgia, he was commissioned in the Engineer Corps, entering active duty in October 1975.  Following completion of the Engineer Officer Basic Course and Airborne training, Anderson’s first assignment was as a combat engineer platoon leader and company executive officer in Neu Ulm, Germany.

Upon completing the Army’s Command and General Staff College, he returned to Fort Bragg as the commander of Company A, 3rd Battalion, 5th SFG(A) (later reflagged as 1st Battalion, 3rd Special Forces Group (Airborne) in 1990). Remaining with the 3rd SFG(A) as the battalion executive officer of 1st Bn./ 3rd SFG(A), he deployed with the group in January 1991 to serve in Operation Desert Storm. Upon his return to the United States, he was reassigned to the U.S. Army Special Forces Command as the chief of operations and G3. He was then selected for battalion command of the 2nd Battalion (Advanced Skills), 1st Special Warfare Training Group (Airborne), U.S. Army John F. Kennedy Special Warfare Center and School . He commanded the battalion from 1992 to 1994, overseeing many training initiatives for Special Forces and joint special operations forces training. He then served as the Assistant G3 for the U.S. Army Special Operations Command through June 1995.

Col. Anderson was selected to attend and graduated from the Air War College at Maxwell Air Force Base, Ala. He returned to Fort Bragg in 1997, serving as the chief of staff of the Special Warfare Center and School for two years. In 1999, he took command of the 1st Special Warfare Training Group (A).  During his two-year tenure, he executed significant changes resulting in the growth of the Special Forces Assessment and Selection and the Special Forces Qualification Course. Remaining at SWCS for another three years, he was made the director of training and doctrine ( DOTD). His last operational assignment was as the J3 of Combined Joint Task Force-Horn of Africa in Djibouti, Africa in support of the Global War on Terror. He retired after 30 years of continuous active service on Sept. 30, 2005.

Col. Anderson and his wife, Jan, were married in their home town of Washington, Ga. in 1975. Upon retirement, he and Jan have remained very active in the Fayetteville and Fort Bragg military and civilian communities, serving as a key link between many support organizations and military families. Following his love and passion for Special Forces history and lineage, he became a member of the Office of Strategic Services Society board of directors. In 2006, he was asked to join the board of the Special Operations Warrior Foundation and has represented the SOWF to Special Forces families and wounded soldiers at Fort Bragg and at Walter Reed Army Medical Center.  In 2009, he co-founded and served as vice president of the USASOC Soldier, Family and Command Support Association, a benevolent organization that supports ARSOF in responding to emergencies requiring financial assistance. Since 2004, he has been involved in the effort to have a monumental statue of the SF Horse Soldier funded, cast and placed at Ground Zero in New York City, and serves on the foundation to maintain that statue.  He is a life member of the SF Association as a member of the Cowboy Chapter in Cody, Wy., and has served on the board of the Fort Bragg chapter of the Association of the United States Army, the Lafayette Society and the Fayetteville-Cumberland County Chamber of Commerce’s Military Affairs Council,the Fayetteville Kiwanis Club and continues as a member of the Fayetteville Independent Light Infantry, where he has sponsored many events for SOF Soldiers and units. His commitment was recognized in May 2012 with the SOCOM Patriot Award for “significant and enduring support to USSOCOM’s wounded warriors and their families.”

He is also very involved with the Friends of American Veterans an organization founded in 1945 in St Mere Eglise France to assist in the continuation of the remembrance and honoring the  D-Day veterans, the invasion and liberation of France and the return of US Veterans to the D-Day ceremonies. In August of 2012 he was inducted as a Distinguished Member of the US Army Special Forces Regiment.

Since retiring from the military he started and runs a private consulting firm, Precision Solutions Group, Inc, which provides advice and assistance to US and International companies on a variety of levels dealing with doing business with the US Government, DOD, Academia and private entities. He has been integral motivator to Templar titan’s management in the early years and has impeccable integrity.  He remains active in engagement with current issues affecting US military veterans, active personnel and their families.